the ice worker sings and other poems

“. . . a great, grieving, and angry song of protest and promise. Andrés Montoya raises a strong voice for the people who inhabit the barrio of Fresno, California, and brings to the general reader sagas of their hope and disappointment . . ." —Garrett Hongo

“Montoya lifts up the dead by giving them a voice; much like Philip Levine, he speaks for those who cannot speak for themselves.” —Library Journal 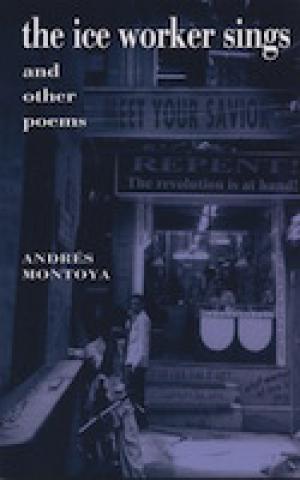 Andrés Montoya received his BA degree from California State University, Fresno, where he studied with Philip Levine and Corrinne Clegg Hales and cofounded the Chicano Writers and Artists Association with fellow student Daniel Chacón. He went on to earn his MFA degree from the Creative Writing Program at the University of Oregon, which was then directed by Garrett Hongo. Montoya published widely in such journals as the Santa Clara Review, in the grove, Bilingual Review/Revista Bilingüe, and Flies, Cockroaches, and Poets, His first book, the ice worker sings and other poems (Bilingual Press, 1999), was awarded the 1997 Chicano/Latino Literary Prize from the University of California, Irvine. The published collection later won a Before Columbus Foundation American Book Award in 2000.

Born on May 18th, 1968, Andrés Montoya died from leukemia on May 26th, 1999, at the age of 31. After his untimely death, the Andrés Montoya Poetry Prize was created by Letras Latinas, the literary initiative of the Institute for Latino Studies at the University of Notre Dame to honor Montoya and his work. The prize is awarded to a first book by a Latino/a poet residing in the United States and includes a cash prize and publication by the University of Notre Dame Press.