Subtitle:
A Reflection on Forced Displacement in the Americas
Description:

Accepting the ancient Greeks’ definition of the idiot as a privatized man and expanding on Tocqueville’s understanding that in modern democracies it is mass idiocy that invites tyranny, Christopher Britt Arredondo argues in Imperial Idiocy: A Reflection on Forced Displacement in the Americas that a double tyranny dominates political culture today. Combining political idiocy with imperial violence, this double tyranny justifies the forced displacement of millions of people from their homes in the two countries in the Americas where the US-abetted “War on Drugs” has seamlessly converged with the “War on Terror”: Colombia and Mexico. By inserting into the discussion and analysis of this violent displacement the views and narratives of those who have been forcibly displaced, this book aims to pierce through the layers of comfort, security, and prosperity that numb imperial idiots in the United States of America to the suffering of the displaced in Colombia and Mexico, while shielding them also from the displacement of their own sovereignty: the displacement, that is, of their republic by empire.

"From the first to last paragraph, this book by Christopher Britt Arredondo unsettles us with a shocking force similar to that of the avant-garde movements of the early twentieth century. We are shocked to discover the cruelty and suffering that accompany the more than 65 million people in the world today who have been violently displaced from their homes. We are also shocked to learn that all this cruel suffering is tied to the displacement of intellectuals from the public sphere and their resettlement in the privatized realms of moral, intellectual, and political idiocy. Recalling that for the ancient Greeks idiocy was an abject condition suffered by individuals who had abandoned their social bonds and responsibilities, to say nothing of their creative potential, in order to selfishly pursue their private interests, Britt Arredondo leads us through a variety of ethnographic experiences that unfold in overlapping contexts of physical, emotional, cultural, political, and economic displacement. While focused on the forced displacement of ordinary families in Colombia and Mexico, Britt Arredondo proposes a suggestive reflection on the displaced position of contemporary intellectuals in his own country: the United States of America. This discussion is crucial for Latin America, where intellectuals and academics have traditionally sought to speak from a place that lies somewhere between science and politics. Although intellectuals in Latin America have played an active role in the construction of nations and states—contributing with the creation of utopias and counter-utopias and even proposing “research in action” as a political project of knowledge production—, this tradition is now subject to the same destructive processes of privatization that Christopher Britt Arredondo analyzes in Imperial Idiocy." —Margarita Serje, Universidad de los Andes, Bogotá, Colombia 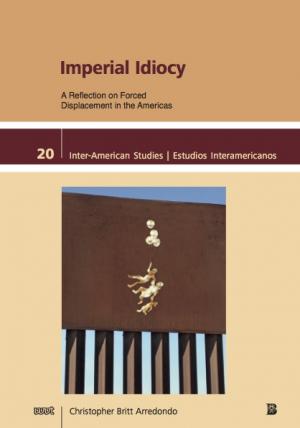