Subtitle:
Perspectives from the forum for inter-american research (fiar)
Description:

The dialogical paradigm that underlies any sincere Inter-American scholarship makes clear that no single scholarly positioning can capture the complexity of Inter-American connectivity. This is what Inter-American Studies share with Global Studies: a necessity to negotiate multiple and at times conflictive paradigms in tackling its objects of investigation. This volume introduces eight key tropes in Inter-American Studies, as they have emerged from the work of the IAS web publication platform forum for inter-american research (fiar) since its foundation in 2008. The editors selected eight key tropes and regrouped essays from the period between 2008-2015 to highlight some of the most important paradigms for the pursuit of interdisciplinary Inter-American studies. The tropes include ‘colonial/decolonial,’ ‘independence,’ ‘religion,’ ‘border,’ ‘mobility,’ ‘race/indigeneity,’ ‘gender,’ and ‘decolonial reflections’. The key tropes chosen should not be seen as separate entities for in many respects they are related or overlap to some degree, nor are they meant to be an exclusive list of terms. They function more as an illustration of recent paradigms and their application. For every trope the editors included one article in English and one in Spanish. 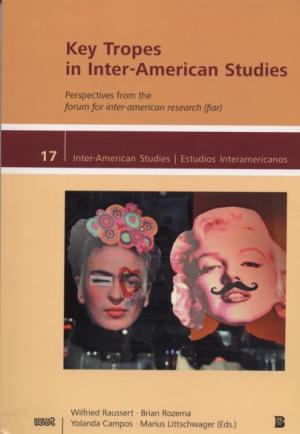